The Lady Rams Soccer team wrapped up the 2020 NISD Tournament with a 3-1 victory over SW Legacy High School.  The Lady Rams had to over come fatigue after playing their third game in three days but did not shy away from the challenge. Senior Captain Taylor Castillo earned a hat trick for her third game in a row thanks to assists from Seniors Cam Casias and Kylie Helterbrand.

Goalkeeper Esther Yoon had her best performance of the of the tournament by keeping the SW Legacy attackers frustrated with seven saves.  The Lady Rams have earned a much deserved weekend off to rest and recovery before they are back in action Tuesday night Roosevelt High School.

Senior Captains Taylor Castillo and Kylie Helterbrand were named to the All NISD Showcase team! 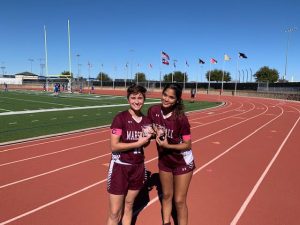 Boys Freshman Basketball B at Brennan HS B Team

Boys Freshman Basketball A at Brennan HS A Team